“Gratitude” is everywhere right now. Thanksgiving is past, so what’s the big deal? The big deal is that a little change in your attitude can profoundly change your life. And practicing gratitude is one of the easiest, most effective ways you can achieve this.

If you want to try it, without further ado, here’s the how-to:

Once a week write down 3-5 things you are grateful to have or have experienced that day.

You can also try these variations:

How does it work?

Immediate benefits include calming a racing mind by focusing your thoughts on specific events, replacing negative thoughts with positive thoughts to lift your mood, turning off your fight-or-flight survival response and allowing the higher brain to work, and the release of dopamine – the feel-good chemical. Your brain is adaptable. Use it or lose it, yes, but also train and re-build it in better ways. Practicing gratitude in any way feels good (remember the dopamine release), and your brain seeks out ways to make itself feel good, repeatedly. Therefore, once you start a gratitude practice, your brain will start to look for more things to be grateful for. Saying or writing thanks to others will also improve your relationships and encourage them to practice gratitude to others and so on and so forth. Talk about changing the world!

Still not convinced? I challenge you to try it. If it’s not for you, hey, no problem. Maybe try a few of the ideas listed above to see if one works better for you. However, if you realize that it only takes one minute, one day a week to become a happier, more well-rested, less in pain, more positive person who attracts more positive things to herself, then maybe you will want to keep up the practice.

I am grateful for you, lovely! Share in the comments below how you practice gratitude and the benefits you have gained.

“I don’t have time.” Have these words ever come out of your mouth? Sometimes as wishful thinking and sometimes to validate not signing up for the third bake sale this month. We all have the same amount of time each day, but some of us are better at filling it with enjoyable activities than others. Here’s how to make the most out of your time to do the things that matter most to you this year! 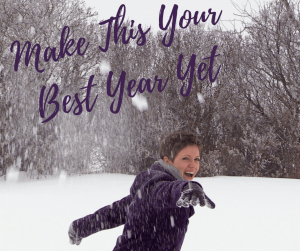 Step 1: Write down things that make you happy, such as spending time with God, your family, a group of friends, a favorite hobby, something to learn about, a dream to pursue, self-care such as exercise, massage, haircut, drinking green smoothies…

Step 2: Write down things you like to do that make others happy. How can you joyfully be of service?

Step 3: Write down the things you do that don’t make you happy or are very draining or stressful to be part of.

First, consider rearranging your schedule so you have an extra hour each week (to start with) to insert an item from Step 1 or 2 above. Next, consider removing something from your Step 3 list by stepping back from roles or friendships that are draining or activities that you were “guilted” into doing.

These action steps can be as simple as asking a friend to invite your child for a play date (and reciprocating to allow her some alone time as well), or as complex as changing your career. The key is to start with something small. Then, let the wonderful feelings of filling your happiness cup snowball into bigger and better life changes, one step at a time.

Be honest with yourself. Even if something logically makes sense, perhaps a high-paying promotion you’ve been working toward, but it leaves you feeling drained and grumpy and unfulfilled, then maybe it isn’t right for you. Think about this: if you take an opportunity that wasn’t meant for you – and you are miserable in doing it – you have blocked someone else from getting to have that opportunity that was perfect for them and their lives. Block out what the world tells you should make you happy and get in touch with your own intuition. The only person that knows what will make you truly happy is you.

Don’t get me wrong, you may still have to do some things that are less than pleasurable if no one else is stepping up or it’s for an important or time-sensitive cause. But, you shouldn’t be afraid to just say “no” if an opportunity doesn’t seem right for you and your gifts to shine. You shouldn’t have to defend your “no” or qualify it in any way.

Let’s recap. Think of something that makes you happy. Rearrange a small amount of your schedule to make time to allow that happiness into your life. Let the good vibes keep rolling!

I’m rooting for you. Share your success stories below!

There is a nasty cough going around…do you have it? I do. What about stomach upset from too many holiday goodies? I have that too. Sore after your last workout? Yep, I am. Oi! My favorite soothing, comfort drink is super easy to make and helps me feel better from almost all ailments. It’s ginger, honey, lemon tea.

List of ingredients: ginger, honey, lemon, water. Ha! Doesn’t get much easier. I should come up with a super special “Mary’s cure for everything!”-type name, but I’ll let you come up with your own.

Let’s talk about why these ingredients are good for you. Here is a list of just some of the benefits of each:

How to make it:

Buy a fresh ginger root in the produce isle of your local grocery store. I break off one large nubbin’ at a time for easier handling. Peel only what you will be using – about 1/4-1/2 inch depending on size of root and strength of ginger desired (a little goes a long way and too much can be bitter). Cut into thin slices.

Add the ginger slices and water to a pot and bring to a boil, then turn down the heat and simmer for 5 minutes. While the water is boiling and simmering, cut a lemon into quarters.  Squeeze one lemon quarter into your cup and add about 1 Tbsp of honey (adjust amounts for taste and therapeutic benefit).

When the ginger tea is done simmering, strain the ginger slices and pour the water into your cup.  Stir in the honey and lemon juice, allow to cool to a tolerable temperature, and enjoy!

You can also steep the ginger in boiling water for a few minutes (like making tea) then remove the ginger and stir in the lemon and honey. Store sealed and unpeeled in the refrigerator up to eight weeks or in the freezer for longer.

What homemade tea remedies have you tried? Share them in the comments below.

When I decided I wanted to start making some of my own beauty products, I dove in the deep end. Deodorant. I have always had extra sweaty pits, so I wasn’t really sure what would happen, but I figured it couldn’t get much worse. Of course, Pinterest came to the rescue and I found two great recipes to try – and both were a success the first go-round!

The main reason I felt so comfortable starting this endeavor was this article I read about why people get frustrated and give up on their switch from chemical-laden to more natural deodorants. This article explains that after years of using store-bought deodorant your armpit pores are pretty well blocked and dependent on all those chemicals to keep “working” in order to stop your sweat and mask the smell, so you have to detoxify your pits before switching.

It just so happens, that our armpit sweat gland system was made for a reason – to sweat! I was extra worried when I read this part, but something kept pulling me to try it anyway, and it was the middle of winter so I’d hoped I wouldn’t pit out too badly. I mixed up a batch of the detoxing spray in that article using only lavendar oil, since I didn’t have rosemary. Since I don’t like to waste, and I had half a tube of deodorant left, I started using the detox spray as I continued to use my store-bought deo. I knew it was working within a couple days because I started to sweat more! Not a gross amount, but enough that I could tell my pits were starting to regain their God-given function.

So, for about 3 weeks, I used the spray at night and put my regular deo on in the morning. During this time I chose my recipe and ordered what I needed from Amazon, with the exception of the beeswax, which my brother-in-law and his bees made for me. Eventually, I used up enough of my deo to not feel bad about tossing the last bit. Then my loving husband washed out that and another container I had kept in my gym bag to use for my homemade deodorant.

Making the deodorant took about 10 minutes – super fast! After letting it sit for a few hours on the counter, one tube went in the bathroom to get used, and the other in the refrigerator to continually confuse my hubby for the next 6 months until he got used to seeing it in there (or for him to keep thinking I’d lost my marbles and put the milk away in the bathroom and my deo in the fridge on accident….which, come on, we do all occasionally have days like that).

It’s been almost a year and I have had to make a second batch of deo, but am more than willing to because it is so easy and I feel so much better for it! (In a pinch, I don’t even mind using straight coconut oil, like when I forgot to pack deo on vacation but had coconut oil along). I still occasionally use the detox spray at night if I’ve had a particularly sweaty day and love that as well for a boost of pit freshness.

P.S. Even though it’s easy, if you still prefer to buy it instead of make it yourself there are tons of great small business that will sell you the good stuff, take a look around Pinterest , Etsy, or your local farmers market.

Winter is just around the corner with its cold weather, short days, and holiday treats. A lovely time to cozy up under fluffy blankets, drink warm beverages, and hibernate until spring. Or, you could have more energy, add less -or even lose- that winter padding, and have more fun! By winterizing your workouts instead of ditching them, you can have all that and more.

If you are an avid outdoor sports person, that’s awesome! If, like some of us, you hate the cold and immediately get a runny nose from a slight cool breeze, you can still thrive this winter. Here are some tips for all bodies:

It is so important to keep moving all winter long. The short days can screw up our energy levels and sleep cycles. Exercise can help you keep your energy up during the day and sleep better at night. With multiple holidays that center around candy and desserts between Halloween and May Day, winter is a prime time for all the negative consequences of overeating. Working out will not only keep winter weight gain at bay, it will balance blood sugars, and maybe even help fight off some cravings. Exercise releases endorphins, the feel-good hormones, which can benefit those who suffer from seasonal affective disorder (SAD). Try to get in at least 20-30 minutes 4-5 days a week of anything from skiing to doing squats while brushing your teeth.

Join the Odyssey Mind & Body Membership Site now to gain access to workout videos you can do anytime. Yoga, Pilates-Barre, and Zumba!