“Forgiveness is hard,” I thought to myself. I was working with my life coach on healing an old wound that was affecting an important relationship. And by affecting, I mean spiraling so often and deep that I was losing sleep, crying in the shower, feeling like I wanted to punch this person in the face (which I would never actually do). But then I realized, forgiveness is simple. It’s the repetition of having to forgive over and over and over again that’s frustrating. 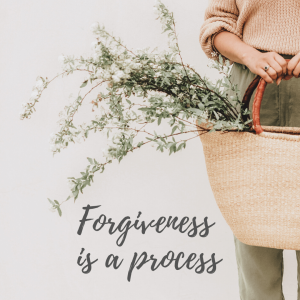 I personally wrestle with “Should I talk to the person who hurt me? Should I tell them that their actions had lasting consequences on my life?” That, I think, is completely individual to you, your relationship with that person, the situation, and what has passed since the original wound. And what kind of boundaries you want to set up with that person moving forward. Maybe they will want an explanation of why you’ve set stricter boundaries, maybe they won’t.

Before you head into any conversations ask yourself “Why do I feel the need to talk to them?” If it’s because you want them to know that they were bad to you, head right on back to step 1 above. You’re still wounded and triggered. If it’s because you want to share your growth experience, own your reactions and triggers, and explain why you are setting boundaries that are in the highest good for everyone involved, then it might be worth it. But, be very cautious that you aren’t returning the favor of being wounded (even subconsciously).

This process can take time, as much or as little as you need (see step 1). And it’s all okay. Keep working on step 2: forgive yourself. Have grace and remember you are only human and that is a good thing.